» What Does Feral Mean?

What Does Feral Mean? 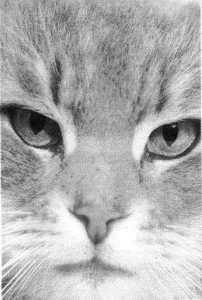 The word “feral” refers to cats who have little or no human contact. They may have been domestic house pets who were abandoned, abused, or born in the wild. They are extremely fearful of people and learn from birth that man is their biggest predator. They keep their distance unless they know you or trust you. In the wild they will learn not to talk for fear of the predator.

In contrast, a stray is a lost or abandoned domestic who keeps his tame nature. Most cats living on their own are feral and live in groups called colonies. These colonies form as a result of human neglect. A pair of feral cats can produce up to 2,500 descendants in five years.

In the colony they share the same food and territory. Most often they are related, but not always. They have loving lifelong friendships, like us, and allowing them to live in their own territory is the most humane and compassionate choice, also a choice the majority prefer. To separate them from their loved ones would be cruel and devastating.

These feral colonies exist all over the world. The best method to control the population and abandonment problem is through a program developed in England known as “Trap-Neuter-Release.” No other method is more humane or effective in managing feral cat colonies and reducing feral cat populations.

The process involves trapping cats in the colony, providing medical care, neutering, vaccinations, testing and releasing back to a safe environment. Once released into a safe place, TNR manages these colonies by providing safe shelter for living and eating. TNR has proved to be the most highly effective method, because nothing else works.

This technique has the best chance of long term success whether the goal is population reduction or lower nuisance. For example, in San Diego county TNR was first introduced in 1992, and by 1994 a 40% drop in euthanasia rates were evident. While the rate continues to drop, TNR also saved the county hundreds of thousands of dollars. Closer to home, in 2003, New Hampshire euthanized 29,000 pets when enacting the low cost spay/neuter program. In 2004, it drastically lowered the euthanasia rate to 2,500. Governor Baldacci enacted this program in 2004 in Maine.

How wild a feral cat is depends on a number of factors:

Age: Kittens ages six to seven weeks are not developed enough to be highly feral so they are easily socialized. Eight weeks or older and their feral nature grows stronger, with socialization becoming harder and with each passing week. Kittens who readily adjust as house cats retain some of their feral characteristics such as fleeing and hiding when strangers come to their home. Beyond five to six months of age, the cat is fully feral for life. However, with older cats, there is a chance that they will socialize to a certain degree and more likely to the person training them.

Personality: The chances are rare, but there are exceptions such as a feral cat becoming friendly after kitten age toward people even though it was born to a feral mother living in the wild. I have experienced this countless times throughout my years of experience.

I would like to conclude my story with one of my successful “TNR” stories. Forty feral cats living in dilapidated shack full of animal waste, no food, no water were successfully rescued, neutered, vaccinated and all adopted to good homes. I adopted “Ruby.” The veterinarian said Ruby would never adjust to a domestic environment. Ruby was the most terrified feral with which I’ve dealt. She would pull her hair out and hyperventilate at the slightest noise. Today, my darling Ruby is my little love boat. If all feral cats are allowed to adjust on their own terms, you’ll never find a more loving, loyal trusted friend.